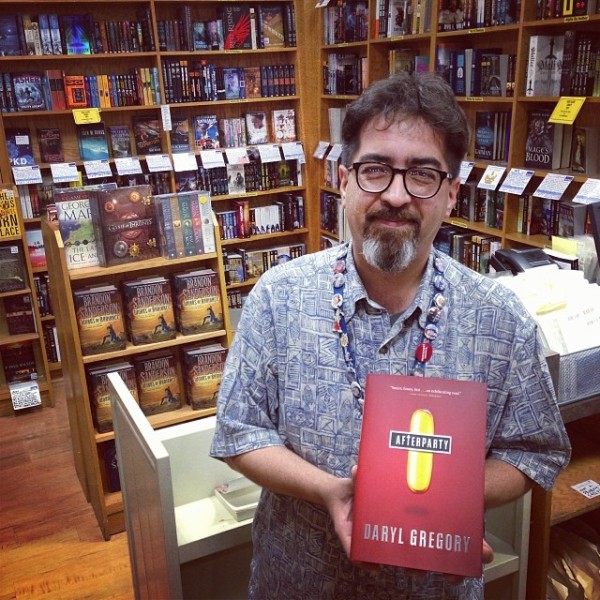 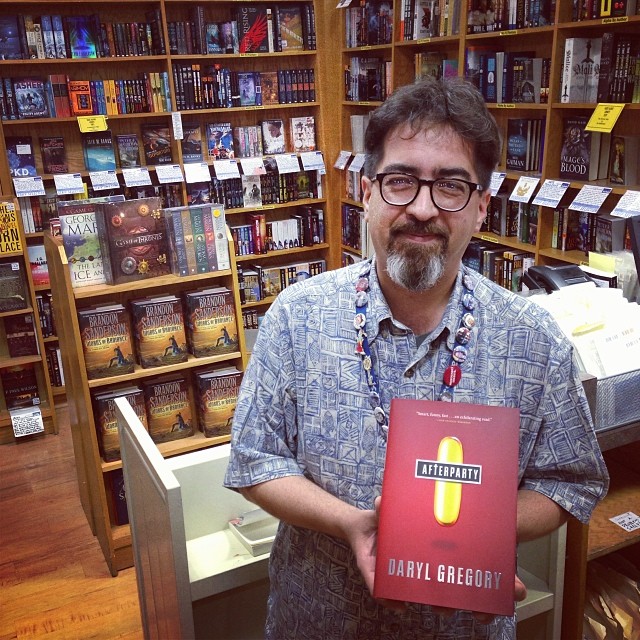 Gregory’s exhilarating new book, Afterparty, draws you into an engaging story that plays on some powerful themes. The underlying idea of what people seek in religion is exactly what makes this story so powerful. Is God real or just a thought in our heads? Parables highlight the background of the characters and enhance the religiosity. That the Godhead is perceived by them with the use of a drug named Numinous suggests the best of Aldous Huxley and Philip K. Dick.

Lyda Rose is not your typical religious zealot. Having been there at the creation of Numinous, and also one of its first overdoses, she is an addict in recovery. Other members of Little Sprout, the company that manufactured Numinous, have pledged never to make it again. So after seeing a fellow patient kill herself when weened off the drug, Rose’s only concern is to stop whoever is…

Robot: mechanical or virtual agent, usually an electro-mechanical machine that is guided by a computer program or electronic circuitry

Cyborg: (short for cybernetic organism) being with both organic and mechanical parts

Android: robot or synthetic organism designed to look and act like a human, especially one with a body having a flesh-like resemblance 2013’s “Her” is a softly-spoken, gently filmed look at artificial intelligence set in a post-Macbook-empire LA. The operating system Samantha (referred to colloquially in the film as an “OS”) is voiced with great care by Scarlett Johansson. This is one of Johansson’s most engrossing performances, rivaled by her turn in 2013’s “Don Jon,” as a fake-fingernailed Jersey princess. Both Samantha and Barbara, Jonhanssen’s character in “Don Jon” are female love interests for their soul-searching, confused male counterparts. The only difference is, Samantha is a computer program designed to facilitate and enhance a human life.

I tried to give everyone I knew a copy of this book over a decade ago. It’s incredible–The Diamond Age may be better. And then of course, there are die hard Baroque Cycle fans. But Snow Crash is certainly the most accessible of his works. Snow Crash is one of the best books I have ever read.  I feel like buying a copy for every single one of my friends, forcing them to read it while I sit and watch their faces.  THAT’S how much I loved this book.  Yes, I was the annoying person on the train during the morning commute laughing out loud, and if any of those poor bastards had dared make eye contact with me, I would have probably insisted on reading entire sections out loud.

I didn’t initially think it was going to be for me.  I’m not a huge sci-fi fan, particularly futuristic technological stuff, but this story is all about people.  Okay sure, a lot of the story was set in the virtual reality Metaverse, but I actually understood what was going on.  And why isn’t more sci-fi funny like this?  Stephenson obviously loves a good pun and…

Following-up on my last post, this would be a great one to re-read. Must check out the extra resources listed here as well.

Recently, everyone and their grandmother are trying to place steampunk in the grander scope of things. Most of pop culture has poked at it at this point. Many in the SF/F community gives the subculture a passing nod (or are slowly edging away, since, being early adapters by nature, quite a few in sci-fi are tired of it already).

Still, questions about steampunk have set people in pursuit of the deeper meanings behind the aesthetic movement. Two years ago, Intel’s futurist Brian David Johnson wanted to answer the biggest one about steampunk’s rise: “Why now?” He was joined by a cultural historian James Carrott and they filmed a documentary, which permutated into a book by the same name: Vintage Tomorrows (or two books, actually. Steampunking Our Future: An Embedded Historian’s Notebook is the free e-book companion you can get online).

I had the pleasure of meeting them at NYCC a…